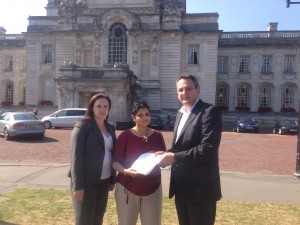 Eluned Parrott said: “Local residents are rightly feeling betrayed by their Council.  Splott and Adamsdown are some of the most deprived areas in Cardiff and deserve decent leisure facilities for local residents.

“Unless the Council intend to deliver what was originally promised for the area then I will be backing residents in their demand to keep the STAR Leisure Centre open and to re-open Splott Swimming Pool.”

Cllr Nigel Howells, who presented the first part of the petition formally at a meeting of Cardiff Council today added: “Many Adamsdown residents were disappointed that the STAR would be closing but had been reassured that a new Community Hub, based at Splott Park, would provide better facilities albeit with further to travel.

“I understand their anger at these scaled down plans and will be backing them in their campaign to keep the STAR open.”